I have been given the names of two more worthy entries to the dog Hall of Heroes.

bones must not omit black bob of dandy fame, or the top dog of  them all the bold RIN TIN TIN.
Ok, let’s have a look then –
Rin Tin Tin has got to be in there with a bark, he was found as a shell-shocked pup during world war one and adopted by the U.S. army (it was probably them who shelled him). He went on to fame as a radio star with Don Ameche and apparently did his own sound effects (does that mean he did thunder and car doors slamming etc.? Now that’s talent).  He appeared as a wolf in the film “The Man from Hell’s River” in 1922 before his first starring role in 1923 with Claire Adams in “Where the North Begins” the film that saved Warner Brothers.
He died a happy dog in the arms of platinum furred actress Jean Harlow in 1932. His son, Rin Tin Tin Jr  took over and starred in many more movies. In fact the legend that was Rin Tin Tin was actually several dogs.
Good call Great-Uncle, Rin Tin Tin is indeed a top dog.

Black Bob, I’m afraid, is in the list of also-rans. I cannot in good faith recommend to my readers one who was billed as “The Dandy Wonder Dog”, this dog obviously has no pride and no place amongst such exhalted company.
Can you imagine him staying in kennels? “Hi boys, I’m the dandy wonder dog!” All the other dogs would move their bowls just a little further away…. 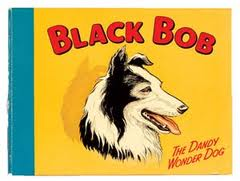 I reckon Black Bob’s just a little too light on his paws for this list.
Keep the suggestions coming and the great debate will rage on.
Bones is oscar mike

AS I TOLD THE GIRL THAT I LOST MY VIRGINITY TO, THANKS FOR LAUGHING AT ME HERE TODAY.

..one womans' journey on the path to self-realization, self-fulfillment and true love...

Adventures of a Maremma dog